My Amiga 600 with Vampire V2 is giving me a lot of troubles. When using this A600 I had many crashes, freezes, reboots. It turned out the processor socket of the Vampire did not very well fit on the A600's CPU. It would come off too easily.

After a lot of removing the Vampire and then pushing it on again only made things worse. Then I decided to replace the CPU socket of the Vampire. It did not give any improvement. What's worse, the new socket cracked quite soon. As many other A600 owners seem to have no problems I asked some member of a Dutch Amiga forum to help solving this problem.

I sent him the A600 motherboard with the Vampire. He first replaced the socket again and it turned out that this would not solve the problem of the Vampire coming off. I had an A600 with a different CPU or there had been done some rework: the Vampire would pop off very easily no matter. So the guy offered me a different motherboard that seemed to hold the Vampire better than the old one.

But after a lot of testing I only can say that pushing a socket on the processor is still not ideal and prone to problems. Besides that it is possible that crashes also originate from the OS (Coffin). Not easy to determine.
Having an A500, A1000 or A2000 with a Vampire would be a much better solution!

The Vampire's price doubled since it's introduction. So I will stick with the A600 and try to make the best of it. That means: open it up often to push the Vampire! 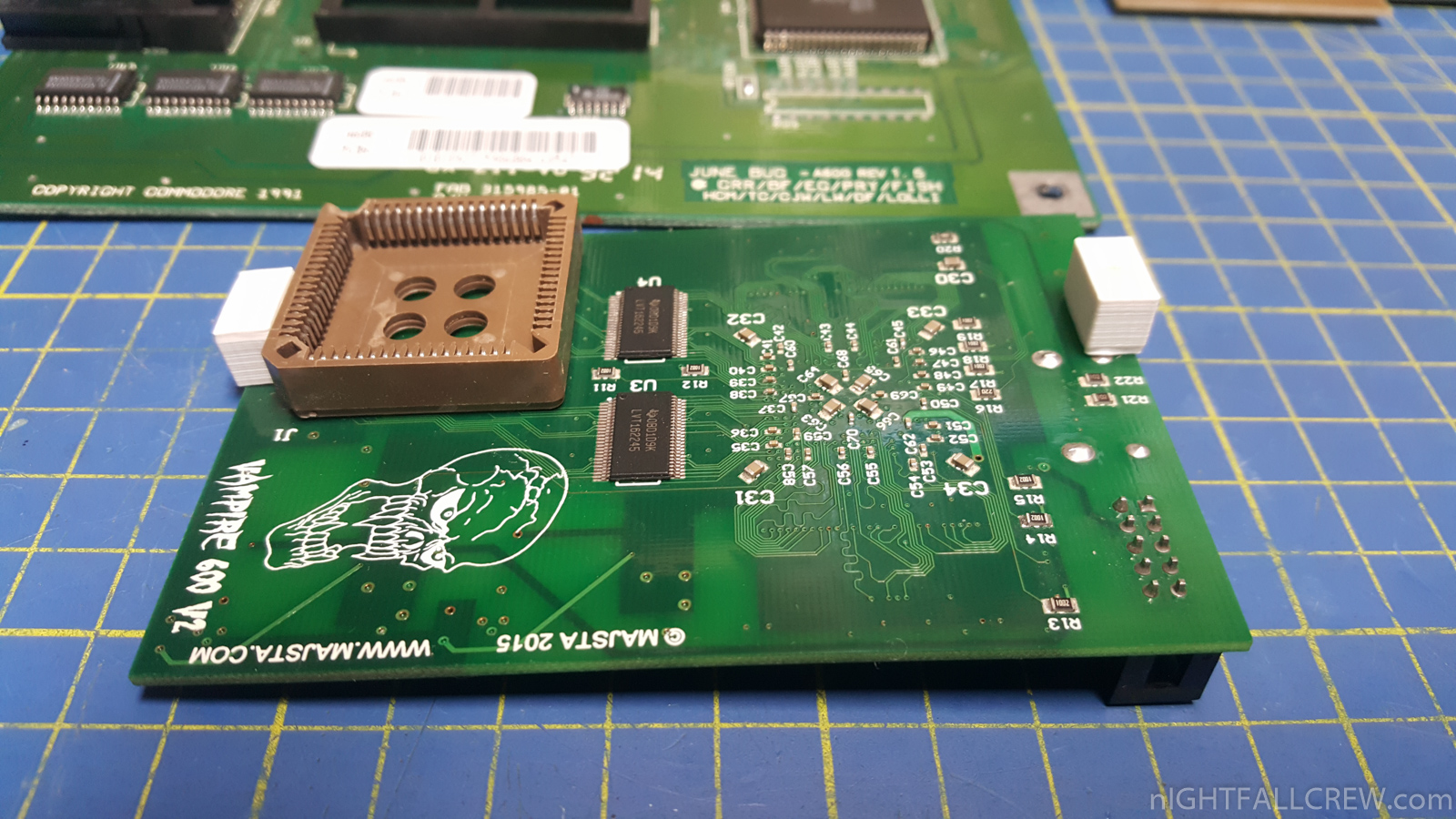 Last month I discovered that the sound of my Amiga 4000 desktop computer did not work. The battery backed clock also did not keep the right time any more. Time to get it overhauled. As I do not have enough skills for this I asked in the A1k.org forums for someone to carry this out. Luckily it was the user milo who wanted to do that for me.

As you can see from the pictures below (before and after) he did a terrific job in a very short time and did'nt ask too much for it. Recommended.
He used ceramic capacitors in stead of the usual electrolytic ones. These ceramic capacitors cannot leak. He also replaced the battery with a coin type.  I'm very happy with the result. Thanks milo! 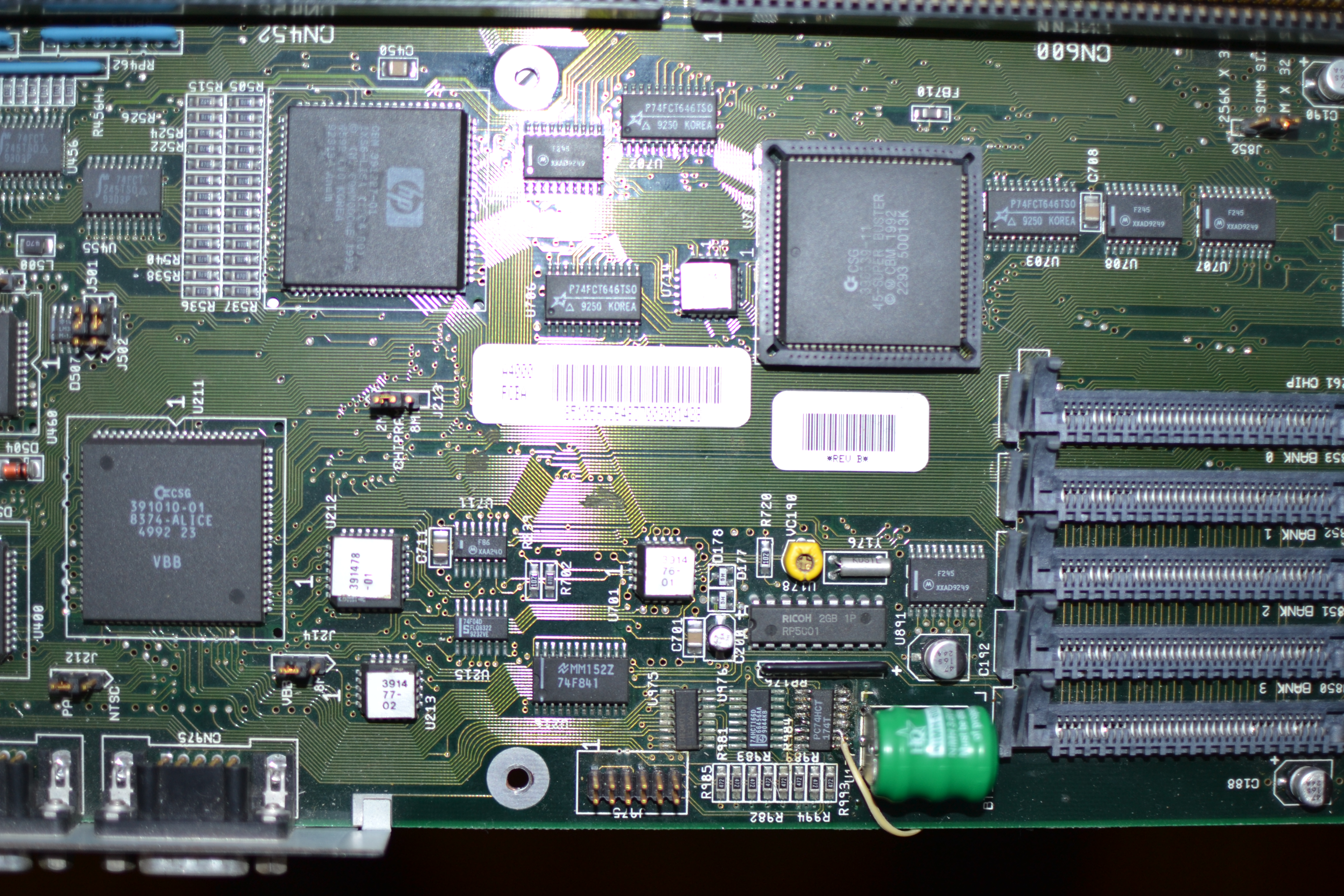 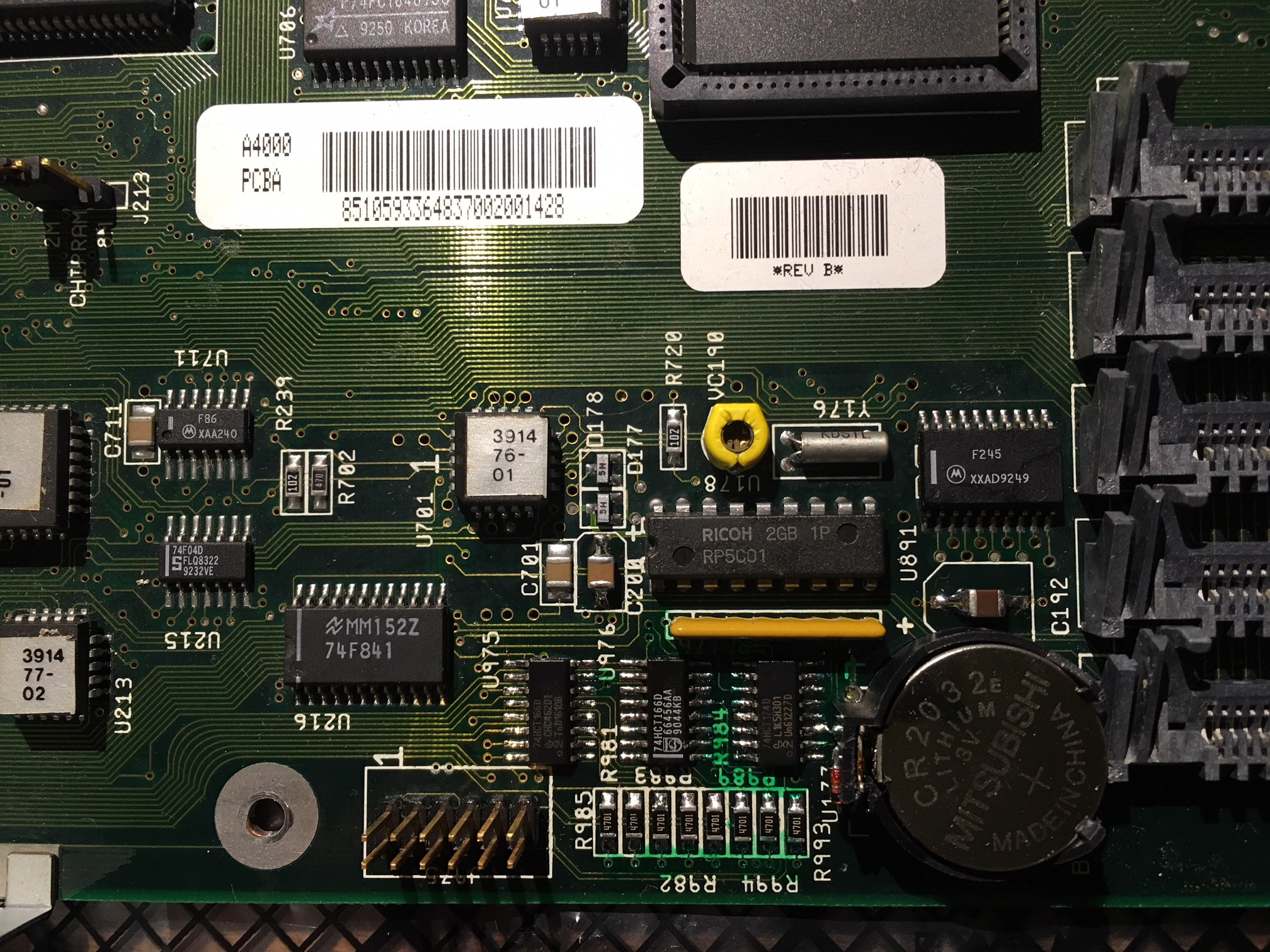 Every owner of a Vampire V2 for the Amiga 600 knows the problem: the Vampire has HDMI out but the positioning of the connector is not very useful. The floppy is in the way using normal HDMI cables/connectors. Besides, normal HDMI cables are way too inflexible.

Some time ago I stumbled upon this. Not cheap but promising. So I ordered one and tested it. I think it's a very nice solution to the problem. 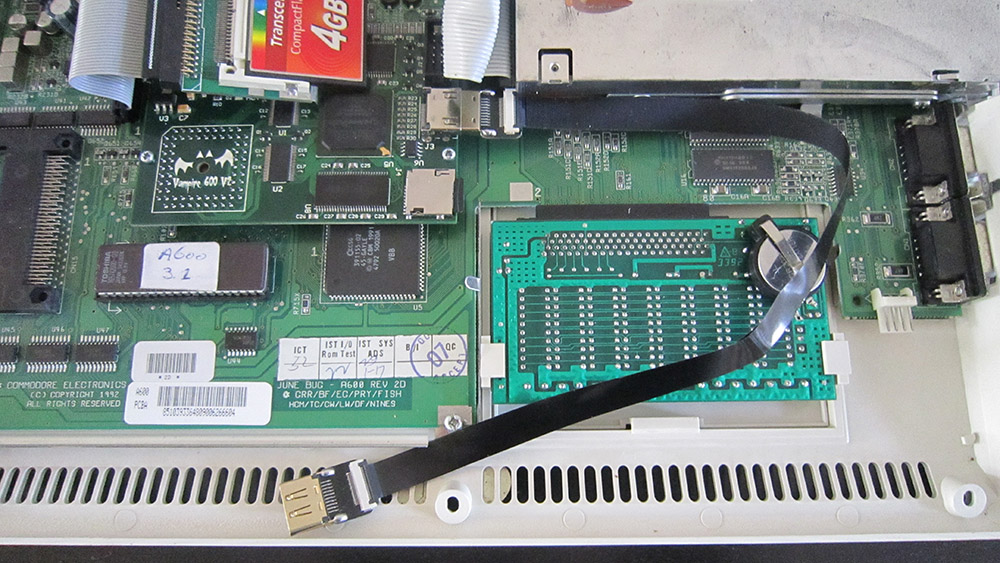 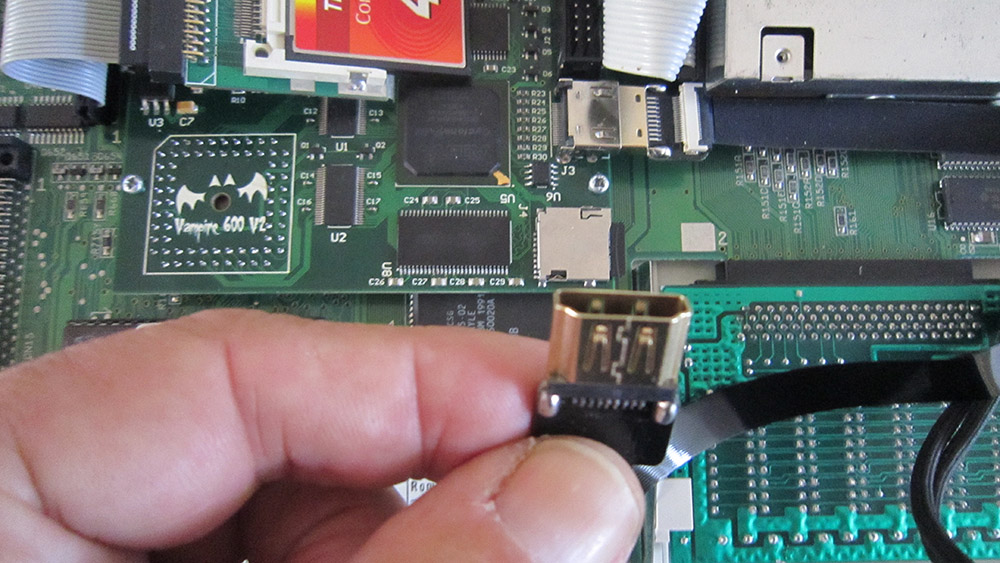 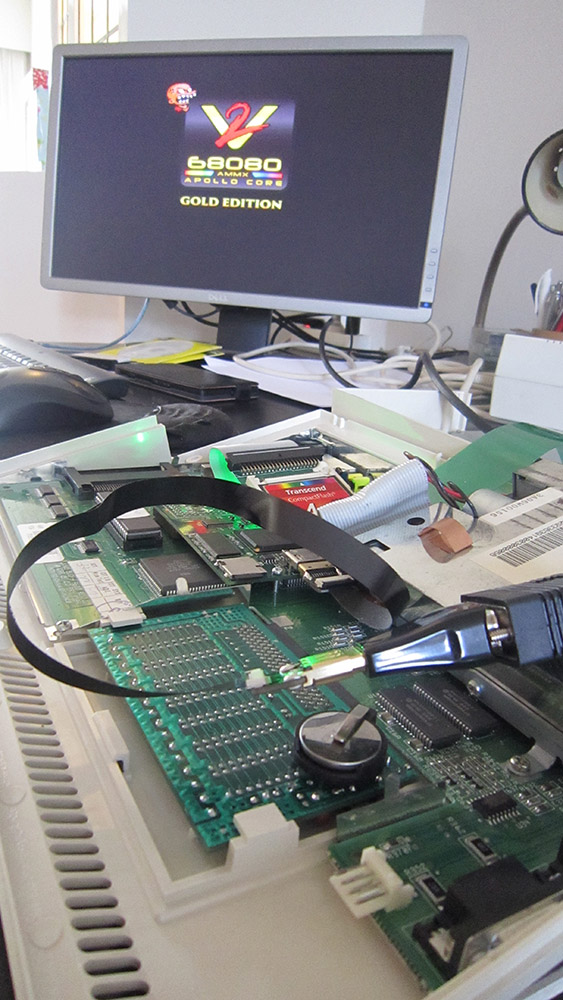 In the mean time I have desoldered the RF-modulator from the A600 motherboard. So I can now find a way to attach the outgoing cable connector to the motherboard.

After a very long wait of about 8 months I finally got my Vampire V2 for the Amiga 600. I wanted to test this beast immediately  and put it in one of my A600's. In the first A600 the board wouldn't stay solid on the processor of the A600 and because of that the Vampire only wanted to run when pressing it with my thumb on the CPU. I also detected a flaw in the A600 that I have to inspect later.

I decided to try it on a second A600 and there the board popped on the CPU and stayed rocksolid. I used the screws of V1 to keep it there. My first impression is that it does not feel as a great improvement from V1 of the Vampire. Figures tell me it is a lot faster though. And it has nice extras: microSD slot (which works but the driver is very buggy at the moment), HDMI port (works good but you have to manage the cable and connector in the cramped A600 case) and 128MB RAM.
A flaw of the board is also that it won't cold boot with a network adapter in the PCMCIA-port. I have to pull it out, boot, use CardPatch and reboot to get the adapter going. V1 of the board has this problem too.

HDMI with VGA-adapter on my Dell monitor: 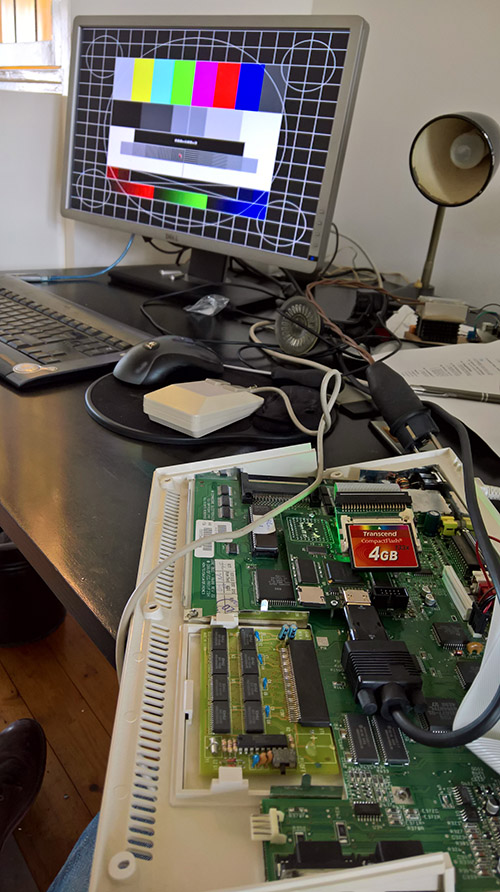