I bought an Amiga 600 from our local internet market. It was sold as good working. But it did not. Well it booted but the Caps Lock key kept blinking. I don't know why that is, but I decided to first give recapping a go. I ordered a set of caramic capacitors from a1k.org. That's a German forum devoted to Amigas. They offer a ceramic capacitor delivery service for several kinds of Amigas. Ceramic capacitors do not leak. So it should be good for several decades.

I'm not yet that skilled in soldering, but after reading a lot of what others said that recapped their Amiga and looking at some YouTube movies I decided to try it myself. The removal of the old caps is done now and i'm very happy with the result.
First I took every cap head with a pair of pliers and kept turning them slowly in one direction. The little legs broke from the cap and the plastic base with the rest of the legs stayed in place. Wiggling the leftovers broke them from the pads and then I could remove the plastic base. After that I could desolder the legs from the pads and clean the board. Goal is to not rip the pad off the board during this process.

Below I have three pictures with the situation before and after removing the smd capacitors. I did not yet remove the through-hole capacitors as I do not have replacements yet and I want to be able to test the result as soon as I have replaced the smd ones.
As you can see in the first picture, the two caps here are sitting very near some plastic connectors. In order to avoid melting the plastic I had these parts covered with alu foil.

As soon as I have got the replacement caps I will show you the result. 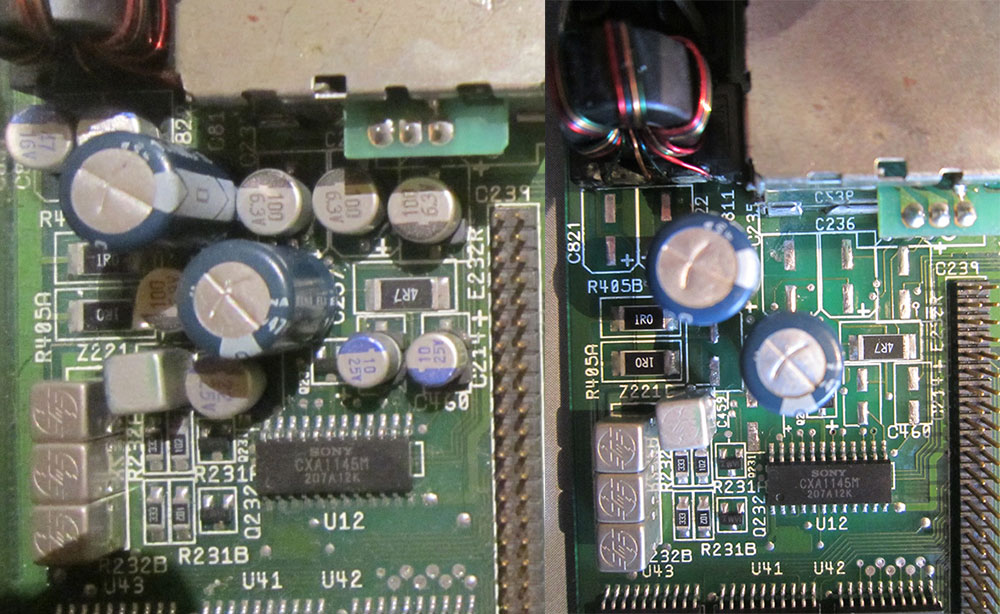