A long time ago I bought an Amiga 1000 with a A1060 Sidecar. A Sidecar is a complete PC XT-clone made by Commodore. It has it's own housing that is attached to the side expansion bus of the A1000 and uses its periferals. The unit I bought had a hardcard in it: an MFM-controller card with harddisk. It worked perfect. But it doesn't anymore. I bought another one, but the disk only worked once. 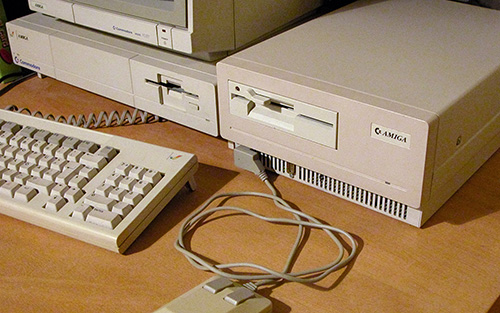 This picture is not mine. I took it from https://compidiaries.files.wordpress.com.

The harddisk stopped working and the many times I attached/detached the Sidecar to the A1000 trying to get it working again has made the connector fail. One or more legs of the 86 pin edge connector do not make contact and aren't easy to repair. A new edge connector is rare and expensive. Only Digikey has some to offer but you pay almost € 70,00! So I put up a Wanted ad on Amibay.com and now I will get a desoldered connector from some guy in Italy.

Another problem of the A1060 was the 360kB 5-1/4 inch floppy drive. I didn't know if it was working because I didn't have MS-DOS system disks in 5-1/4 inch. I now managed to get a drive and attach it to an older PC. After much trial and error I now have a system disk to boot the Sidecar once it is repaired.

On the picture the board with connector desoldered.
To be continued.