Last winter I had some problems with the brake servo on my Amazon. This brake servo is from a brand called Powertune and it is likely to be made in China. The problem was it wouldn't work after the car had some weeks not being used. By applying a strong foot on the brake pedal it would come loose and work again. This winter this also didn't work: it just stopped working at all.

So I went to my local workshop and the mechanic advised to install a new one. He used a Powertune again, because this unit is much cheaper than a genuine Lockheed. This unit would work but with some flaws. It had a retarded reaction on the foot. After applying the brakes firmly the servo would come in but after a second. Releasing the brake pedal it also released the brakes a second or so later. This is very annoying.

So I got in my car to visit the mechanic again, but now it works much better. Not as smooth as it should be but the retarding is almost gone.

This week I moved the van into storage and the PV544 out of it.
There was some work to do: The indicators were very weak and the windscreen washer did not function at all. As these functions are mandatory at the periodical legal test so I had to repair these immediately. This is a 6V car you know...

I cleaned some ground wires at the battery and the fusebox and all was well with the indicators, but the control light on the dashboard did not work. I tried to repair the flasher but eventually it got bad. So I ordered a replacement, which is also suited for LED's. I may replace some bulbs for LED's if that is going to work with 6V.
The gears in the pump for the washer were full of lime and I had to dismantle it fully to get it functioning again. 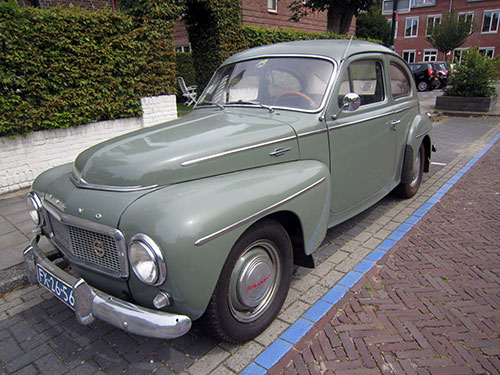 Everyone who has a Volvo with B16A engine should know this: if you need a new vacuum advance unit for your ignition Bosch VJU4BR20, Volvo partnumber 233746, there is only one seller in the whole world that (at the moment) sells this item NOS. He is from Cyprus.

Grab one before you are forced to use an electronic ignition.